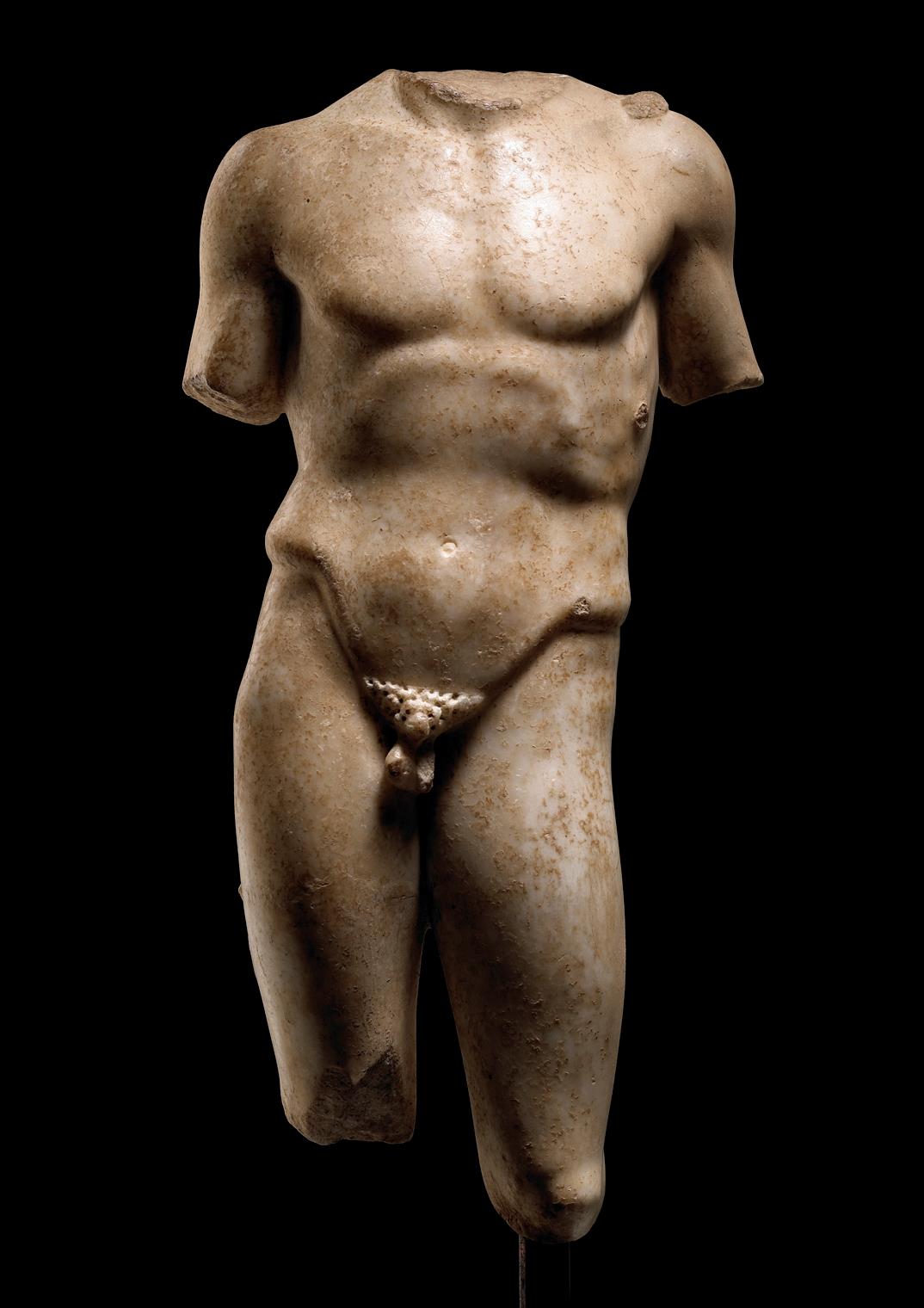 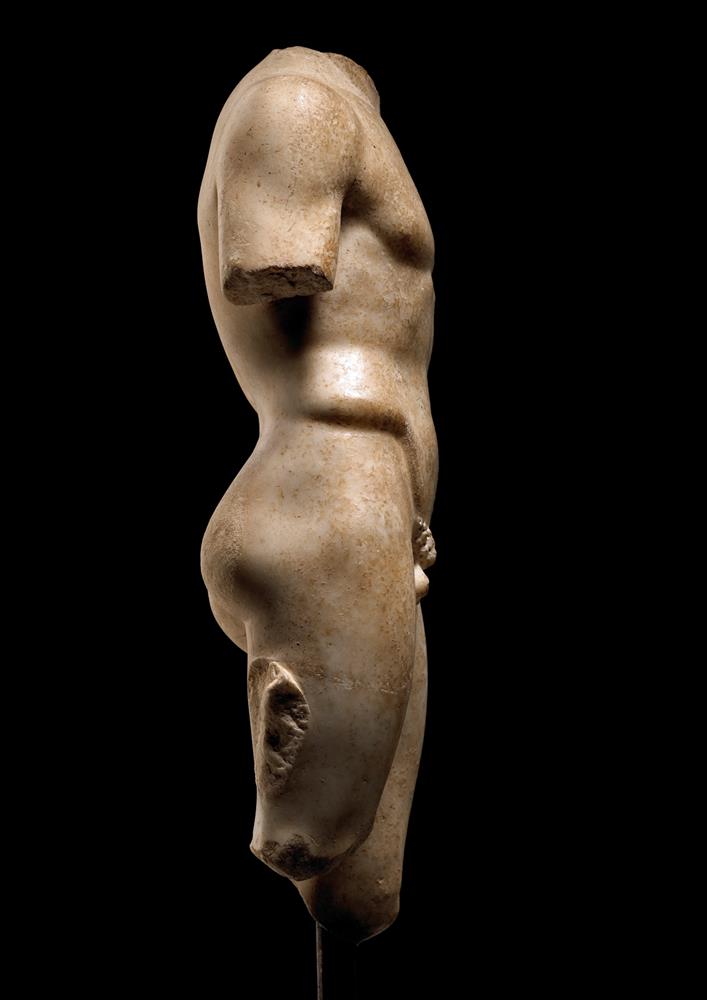 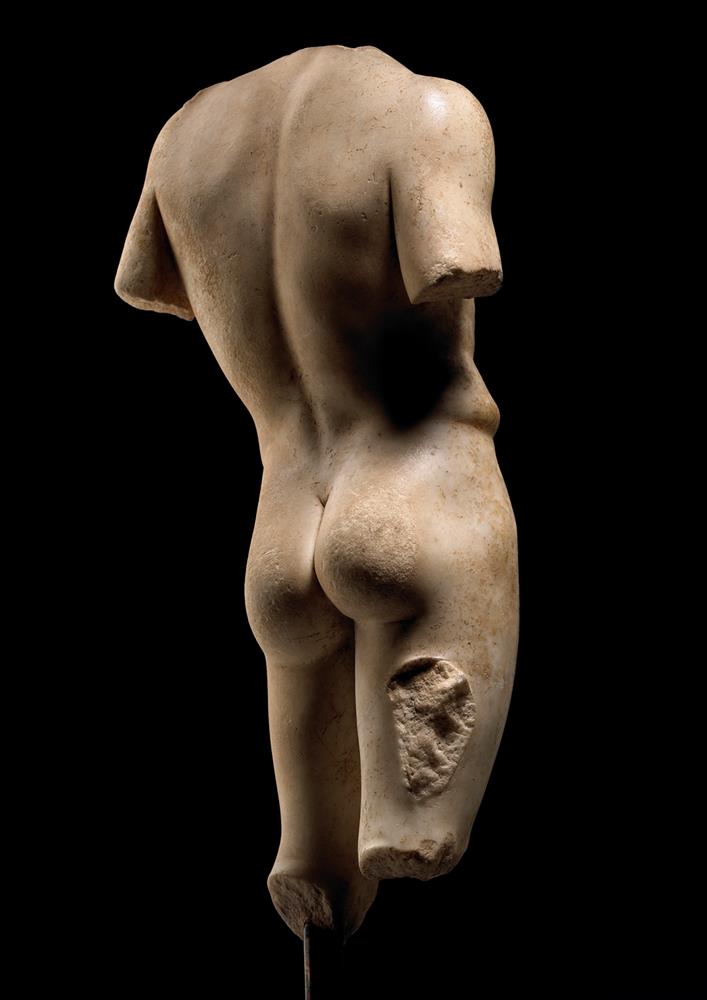 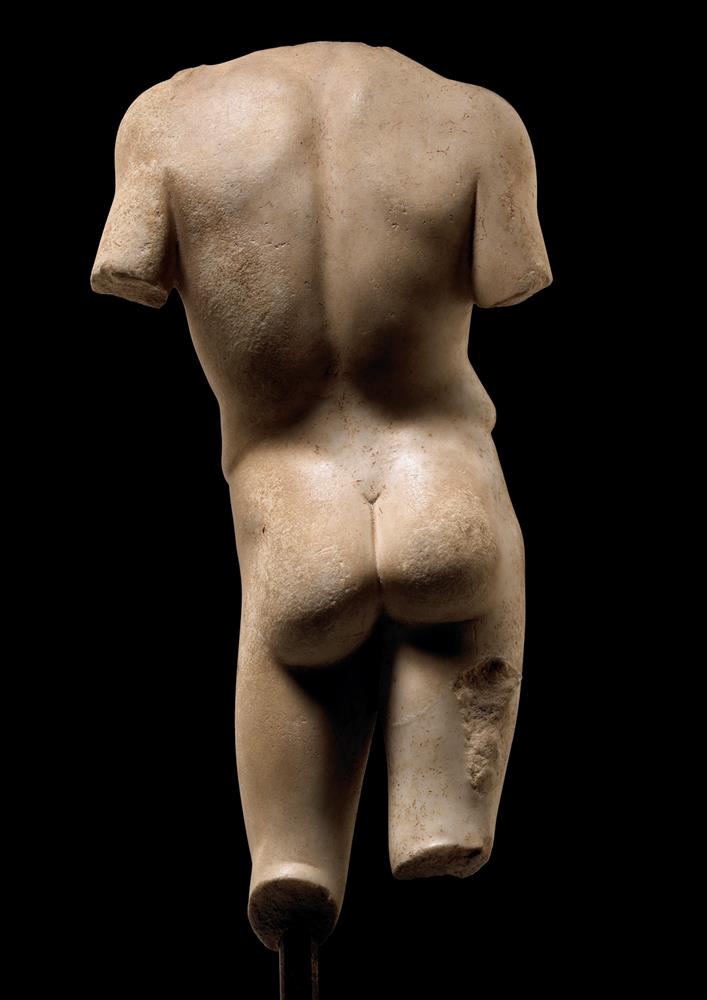 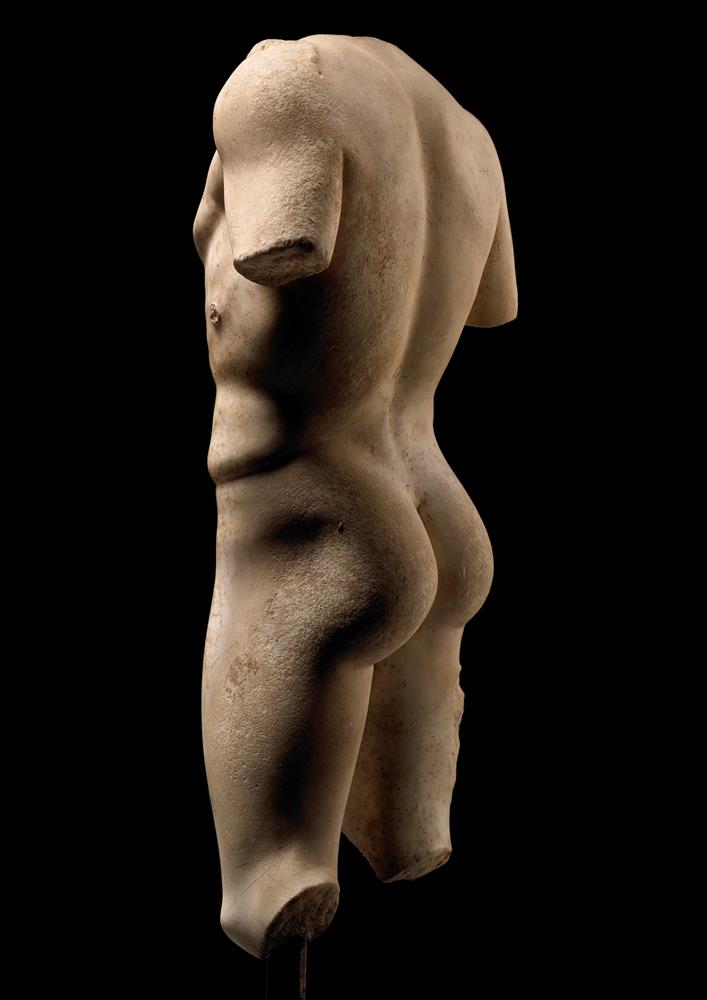 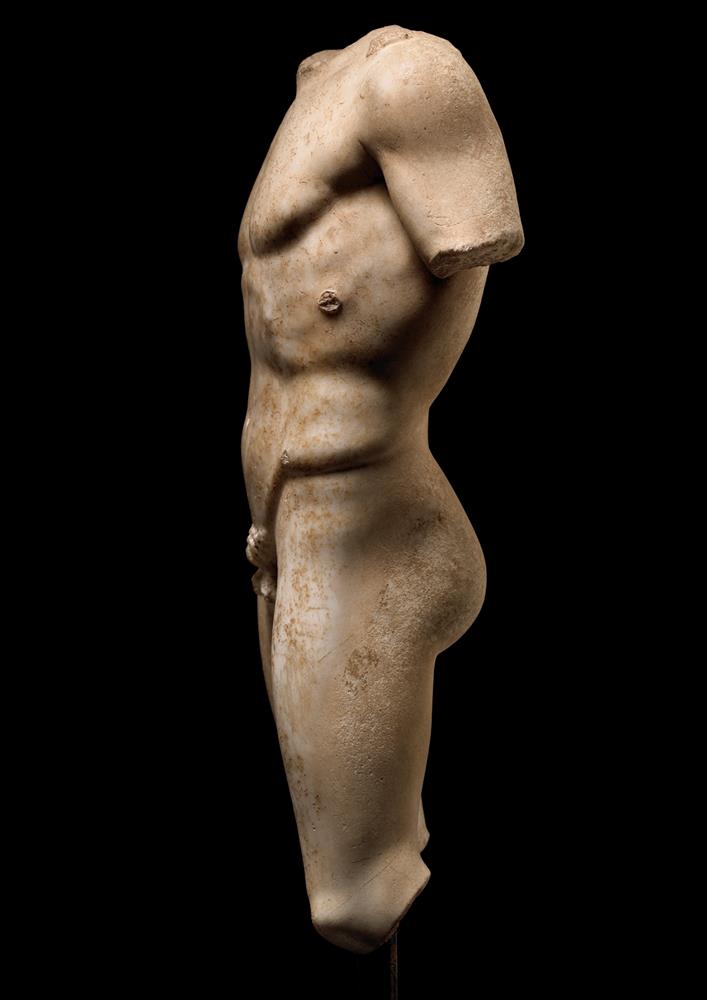 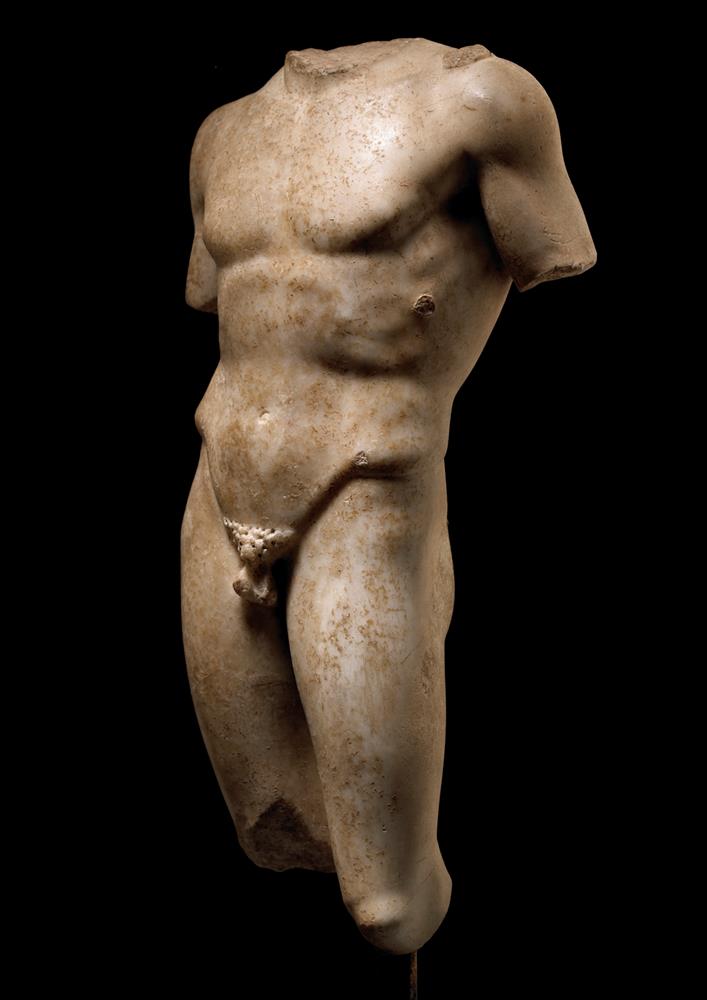 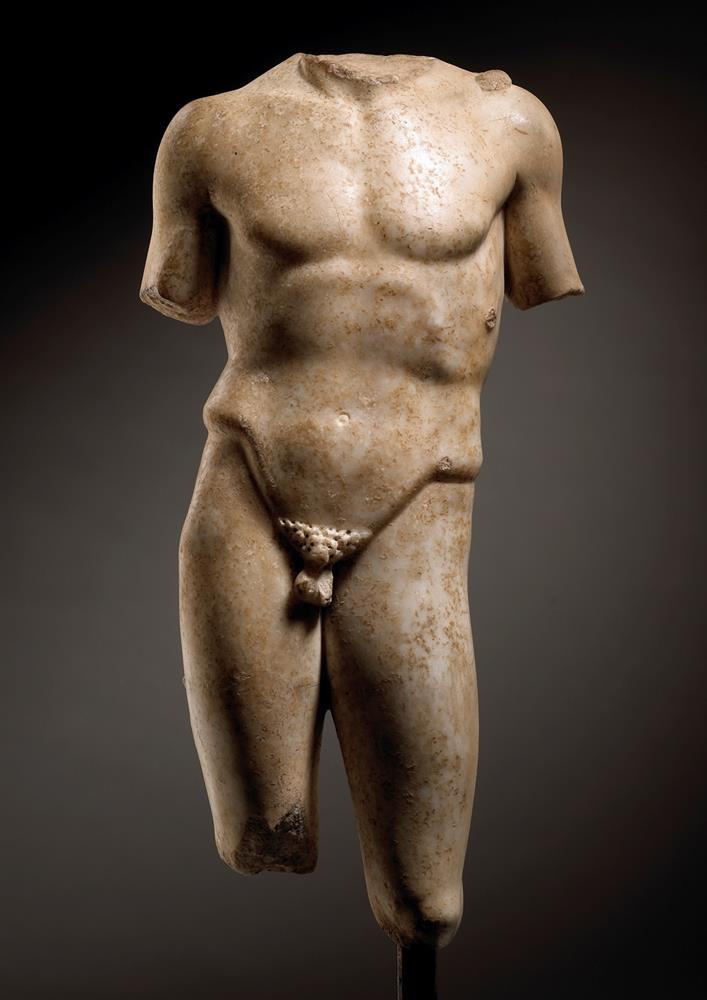 Figure of an Athlete Marble

Dating to the 1st century A.D., this finely carved torso, which portrays an athletic male body, is an Imperial Roman marble inspired by Greek fifth-century prototypes. The torso reposes in harmonious equilibrium as the figure stands in the canonical contrapposto pose, with his weight on his right leg, while the left is slightly flexed. The developed musculature is well-defined with marked abdominal and pectoral muscles and strong side obliques; particular prominence is given to the highly accentuated iliac crest, which further intensifies the body’s stance. Standing elegantly upright, the figure was not engaged in an active movement; this is also suggested by the protuberance on the back of the right thigh which indicates that it was once linked to another fragment, perhaps a support. An additional trace of an attribute, such as a spear, is present on the left shoulder, which is slightly elevated.

The athletic body was highly visible in ancient Greece, where, as evidenced by contemporary sources, there was a tradition of athletes competing naked (Barrow, 2018, p. 26). Aristotle writes that ‘in a young man, beauty is the possession of a body fit to endure the exertion of running and of contests of strength; which means that he is pleasant to look at; and therefore all-round athletes are the most beautiful being naturally adapted for both contests of strength and for speed also’ (Aristotle, Rhetoric, 5.1361b. 3-12, tr. W. R. Roberts, Oxford, 1924). The birthplace of the Olympic games, ancient Greece gave great prestige to athletic contests, and winners were rewarded with conspicuous honours and privileges, which included in some cases the erection of sculptures to their everlasting memory.

The youthful and physically flawless body of our athlete is characteristic of the idealised portrayal of the human figure that typified classical Greek sculpture in the fifth century B.C., and that would be admired and revisited in Imperial Rome. The present figure is clearly inspired by the Diadoumenos in the Metropolitan Museum, a Flavian period full-length representation of an athlete tying a ribbon to his head, and the early Imperial Doryphoros (‘Spear-bearer’), now in the Museo Archeologico Nazionale, Naples. Both derive from compositions attributed to the Greek mid-fifth-century BC sculptor Polykleitos, whose bronze originals, now lost, are praised by ancient sources and known to us through Greek and Roman marble copies. A closely comparable example (but lacking the finesse of carving) to the present figure is the Torso of a young god or athlete, dating from the 1st century A.D. and realised on a similar scale, now in the Museum of Fine Arts Boston (inv. 1974.123).

Rome’s conquest of Greece had begun, in the Republican period, with the Roman victory at the Battle of Corinth in 146 B.C. As Roman presence in Greece intensified, so did the invaders’ interest in the exquisitely fine paintings and statuary they encountered in their new province. As the Roman poet Horace (65-8 B.C.) wrote, “Once conquered, Greece in turn conquered its uncivilised captor, and brought the arts to rustic Latium” (“Graecia capta, ferum victorem cepit, et artes intulit agresti Latio”, Horace, Epistulae, book II, 1:156). To some extent an overstatement, this phrase certainly captures the undeniable influence Greek art had on its Roman counterpart. Indeed, owning works of art of Greek origin or inspired by Greek models became amongst Roman citizens a mark of both education and wealth, and such works gradually came to adorn not only private residences, but also places of worship, thermal baths, theatres and public monuments. In the case of our figure, its function would have been not so much to revere a specific athlete, but to evoke at once ideals of beauty and the learning of its patron. In other words, in their Roman context, images drawn from Greek iconography became expressions of Roman culture, interests, and values.

James Freeman, Kyoto, Japan, probably acquired from the above in the early 1970’s;

Acquired from the above by Willard and Elizabeth Clark on 21st December 1980.