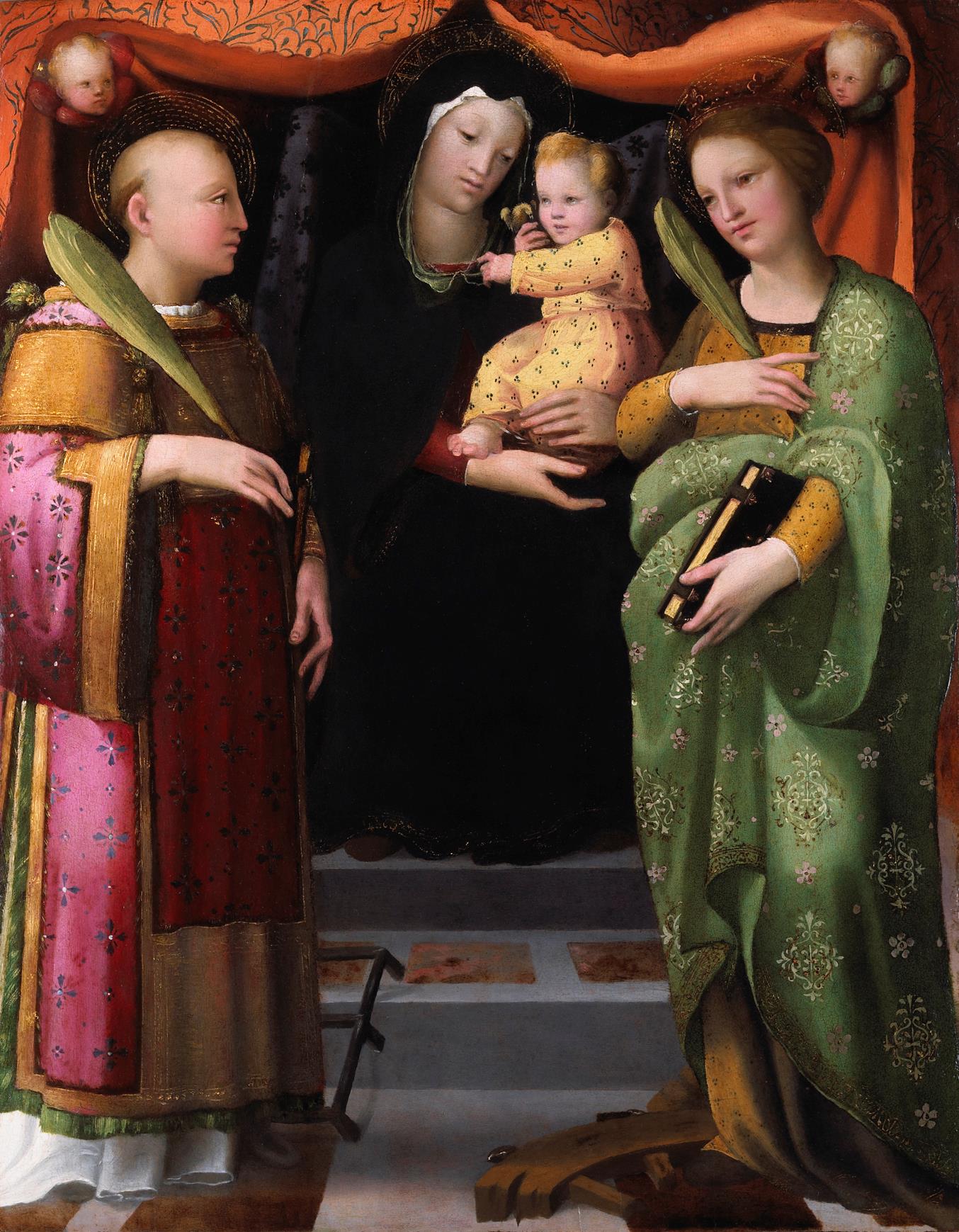 An important rediscovery, the present panel was first published by Michele Maccherini as an autograph work by Domenico Beccafumi, dating to 1515-1518, in 1988. Maccherini based his attribution on a photograph of the present work, at the time untraced, in the Kunsthistoriches Institut, Florence, which was donated to the archive by “H. Abels” of Cologne in 1934 and bears a note specifying the painting was then in a German private collection. The panel’s attribution to Beccafumi was confirmed by Roberto Bartalini in the catalogue for the seminal 1990 Beccafumi exhibition in Siena, by Marco Torriti in the 1997 catalogue raisonné of the artist’s work, and, more recently, by Pascale Dubus, in her 1999 study on the Sienese painter. On the basis of photographs, submitted after the painting was cleaned, Maccherini has reconfirmed his attribution to Beccafumi and the proposed dating (email correspondence 2 October 2018). Indisputable confirmation that the present composition corresponds to the one in the photograph found by Maccherini in the Kunsthistorisches Institut comes from the fact that in his article the scholar noted a “butterfly” just above the head of Saint Lawrence, which indicated the painting was executed on a wood panel, the support of the present work, and that it was most likely of medium format, as indeed The Madonna and Child with Saint Lawrence and Saint Catherine of Alexandria is. Crucially, the “butterfly” discernible in the Kunsthistorisches Institut’s file matches, in shape and position, the one visible to the naked eye in our panel.

Domenico Beccafumi, one of the leading Sienese painters of his generation, was born Domenico di Giacomo Pace in 1486 in a country estate just outside the city. According to Giorgio Vasari, who had met him in person, he received his early training as a painter thanks to the generosity of Lorenzo Beccafumi, a wealthy landowner his father worked for and whose surname the young Domenico adopted in sign of gratitude. Little is known about the beginnings of Beccafumi’s apprenticeship in Siena, but Vasari tells us that between 1510 and 1512 the painter was in Rome, where he witnessed first-hand the extraordinary artistic ferment of the Vatican fabbrica under the patronage of pope Julius II (1503-1513). Highlights included the early stages of Raphael’s frescoes in the private apartments of the pontiff, known today as Raphael’s Stanze, and Michelangelo’s ceiling of the Sistine chapel, which was completed in October 1512. Upon his return to Siena in the same year Beccafumi received his first notable commission, for the fresco decorations and the altarpiece in the Cappella della Madonna del Manto in the hospital of Santa Maria della Scala.

Religious commissions would constitute the core of Beccafumi’s output throughout his career, but remarkable exceptions include the mythological panels that he executed for the Sienese residence of Francesco Petrucci (1519, now identified with works in Birmingham, London, Rome and Florence, see Torriti, pp. 92-97), the frescoes for the ceiling of Palazzo Venturi, also in Siena (1520, see Torriti, pp. 97-108), and those for the ceiling of the Sala del Concistoro in Siena’s Palazzo Pubblico, which would occupy him, with intervals, throughout the 1530s (see Torriti, pp. 153-163).

An artist of wide-ranging talent, Beccafumi also executed the designs for the marble intarsia flooring of Siena’s Cathedral (see Torriti, pp. 200-215), and modelled the papier-mâché monument of Emperor Charles V intended for the sovereign’s visit to the city in April 1536. Less ephemeral examples of his skill as a sculptor include a polychrome terracotta Annunciation group now in the Museo dell’Opera del Duomo, Siena, and eight life-size Angels as candle-bearers in bronze, also for the Cathedral (see Torriti, pp. 221-227). His hand has also been identified in four illuminated letterheads in a manuscript on vellum preserved in Siena’s hospital of Santa Maria della Scala (see Torriti, pp. 113-114).

As Maccherini first proposed, the present panel is to be inscribed within Beccafumi’s early activity, when, having returned from his first Roman sojourn, he soon drew the attention of prominent Sienese patrons. As identified by Maccherini – and confirmed by Bartalini and Torriti – the paintings most closely related to The Madonna and Child with Saint Lawrence and Saint Catherine of Alexandriaare certainly the Saint Catherine receiving the stigmata originally in the Olivetan convent by Porta Tufi (see Torriti, pp. 72-74, Pinacoteca Nazionale, Siena), and the Saint Paul enthroned altarpiece destined for the saint’s chapel in the Tribunale della Mercanzia (see Torriti, pp. 79-81, Museo dell’Opera del Duomo, Siena).

In the Saint Catherine receiving the stigmata, executed between 1514 and 1517, Beccafumi skillfully engaged with the established Florentine tradition of religious altarpieces. Indeed, the arrangement, with its overall sense of symmetry – only partially disrupted by the flying angels that animate the top of the composition – its classicizing architectural setting and its use of side figures to flank the central scene, echoes the sacre conversazioni of Fra Bartolomeo and Raphael, which the young Beccafumi would certainly have been familiar with. A similar configuration is adopted in our Madonna and Child with Saint Lawrence and Saint Catherine of Alexandria, where the Virgin sits beneath an evenly parted curtain and the saints stand, at the same height, each in front of a flying cherub. In addition, in both panels the illusion of depth is reinforced via the insertion of a geometrical pattern in the flooring, also an established painterly device. In stylistic terms, the almost statuary quality of the profiles of Saints Catherine and Jerome in the Olivetan altarpiece, borrowed from classical antiquity, reappears most visibly in the present figure of Saint Lawrence, and the traits of the flying putti visible at the top of the composition, with their pronounced foreheads and tightly designed facial features, are repeated in the two cherubs that draw the curtain in the present painting.

An equally stringent similarity exists between the present Madonna and Child group and the one in the Saint Paul enthroned altarpiece, dated to 1516-1517, as in both compositions the infant reaches across to touch his mother’s veil with his left hand, while holding in his right one a small bird, and the Virgin casts her gaze affectionately towards him, while supporting him with her right hand and folding her left one around his back. In addition, the curtain that, drawn apart by angels, reveals the Madonna and Child in the Mercanzia altarpiece appears to have developed directly out of the one in the present panel, closely positioned as it is over the two figures. A departure from the balanced compositions of the Florentine tradition, the striking central figure of Saint Paul, enveloped in a flaming red cloak, sits distributing his weight diagonally and surrounded by an array of figures that defy symmetry, a characteristic that has led scholars to date the Saint Paul enthroned after the Saint Catherine receiving the stigmata.

Given the composed formal quality of the present sacra conversazione and its even distribution of light on the figures, with a chiaroscuro effect reserved for the focal figure of the Madonna, against whose cloak the brightly painted robe of the Christ Child stands out, in 1988 Maccherini suggested it might immediately pre-date the Saint Catherine receiving the stigmata. Upon inspecting photographs taken after the panel was cleaned, the scholar noted a softness in the modelling that may edge it closer to the latter part of the 1510s, a dating already put forward by Bartalini, who placed the execution of this painting between the Olivetan altarpiece and the one for the Mercanzie, arguing it ushers in Beccafumi’s transition from the more “classical” language of the Saint Catherine to the disruptive inventive power of his later works, which recalls that of Alonso Berruguete and Rosso Fiorentino in Florence. Torriti, also detecting the influence of Fra Bartolomeo, favours Maccherini’s theory of dating the present panel just prior to the Saint Catherine.

We are grateful to Michele Maccherini for confirming the attribution to Domenico Beccafumi on the basis of photographs.

Private collection, Germany, 1934, as annotated in a photograph of the present work in the Kunsthistoriches Institut, Florence, donated by “H. Abels” of Cologne, Germany