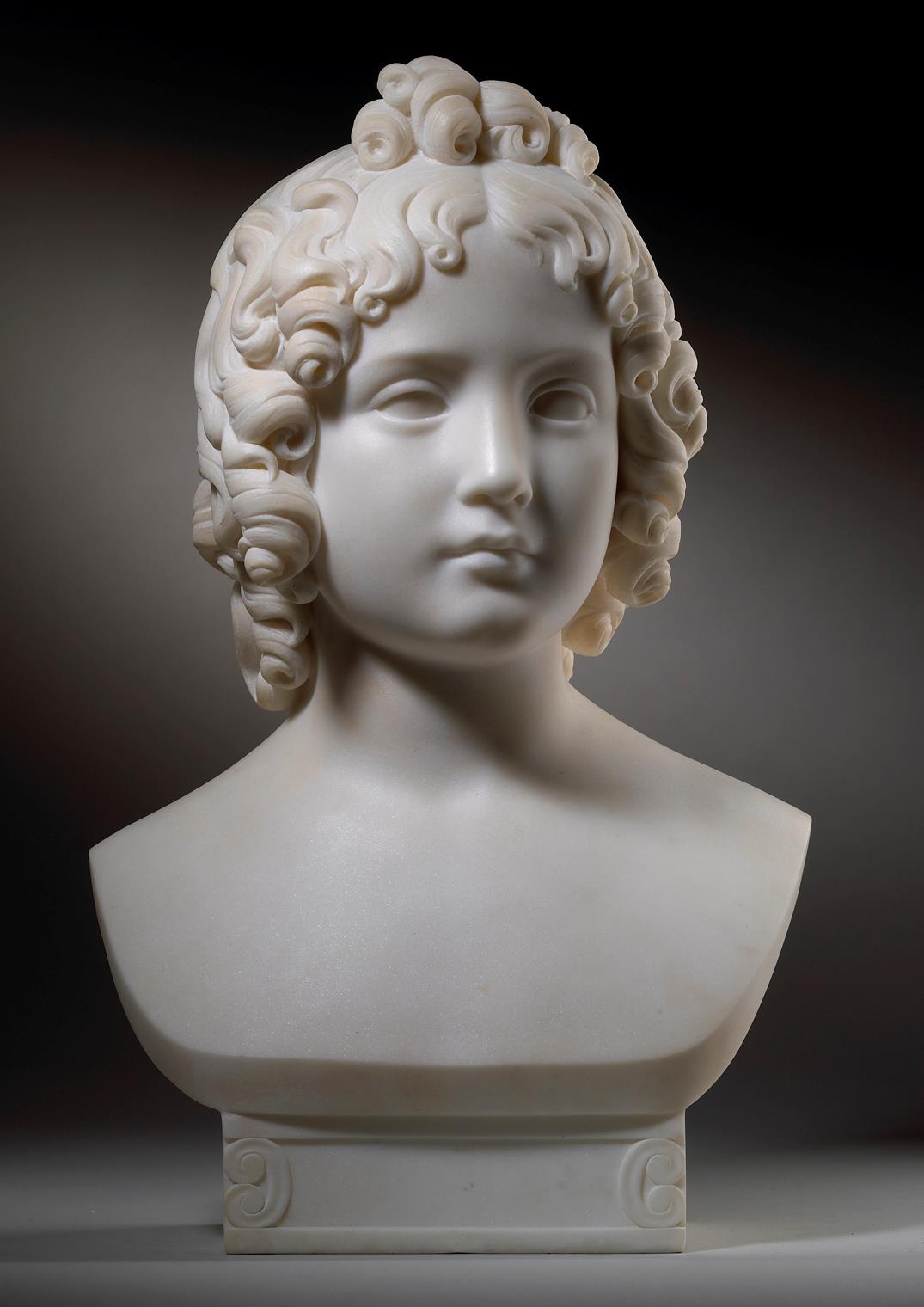 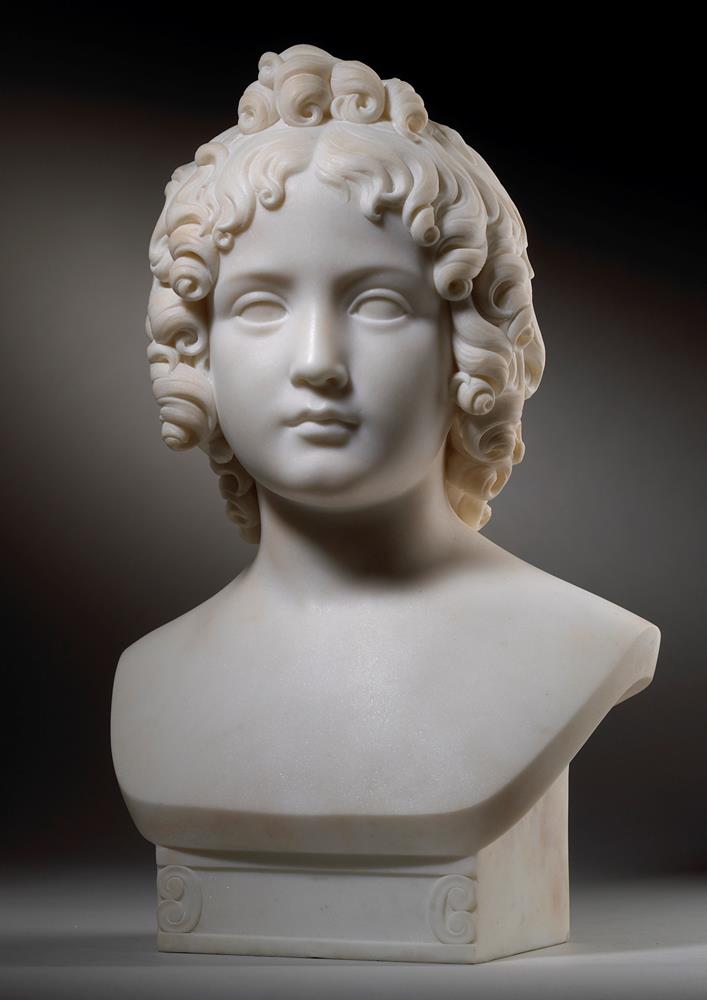 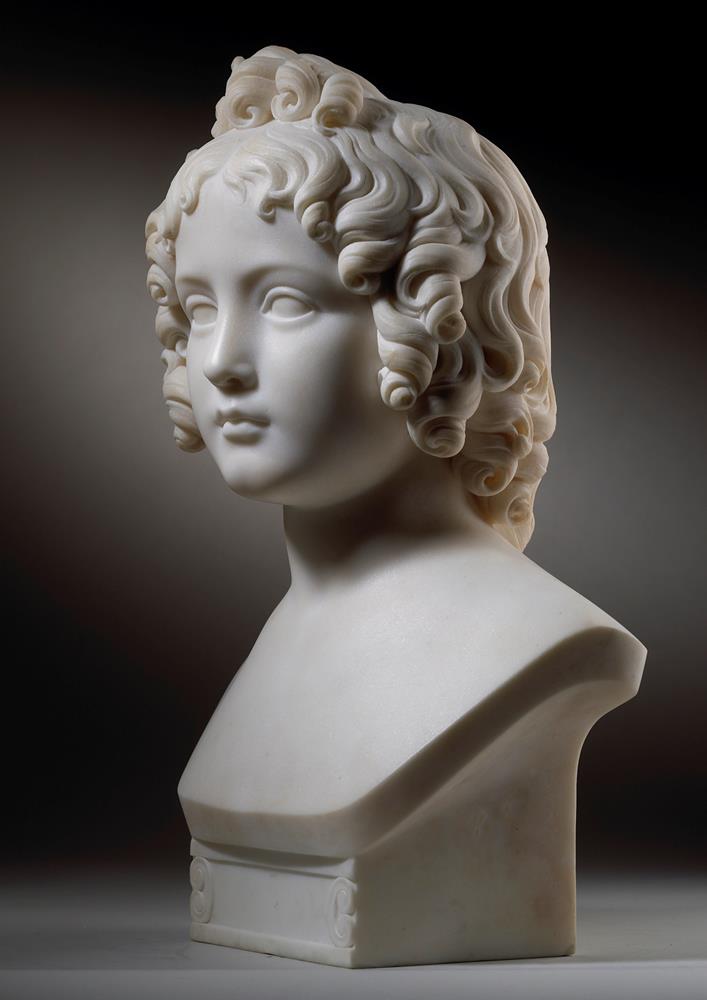 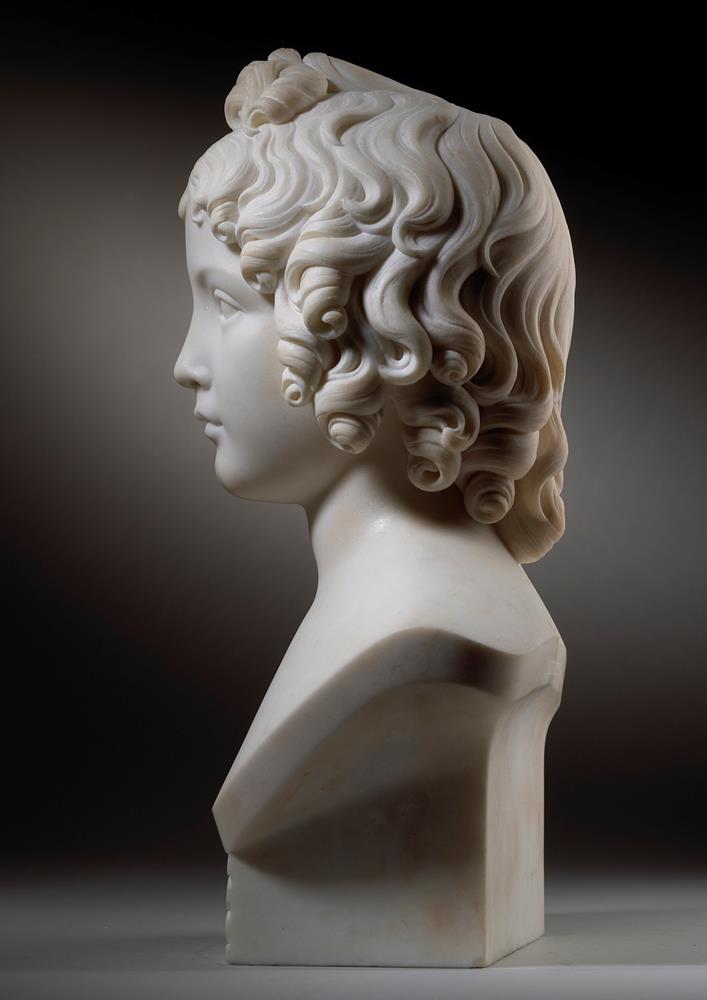 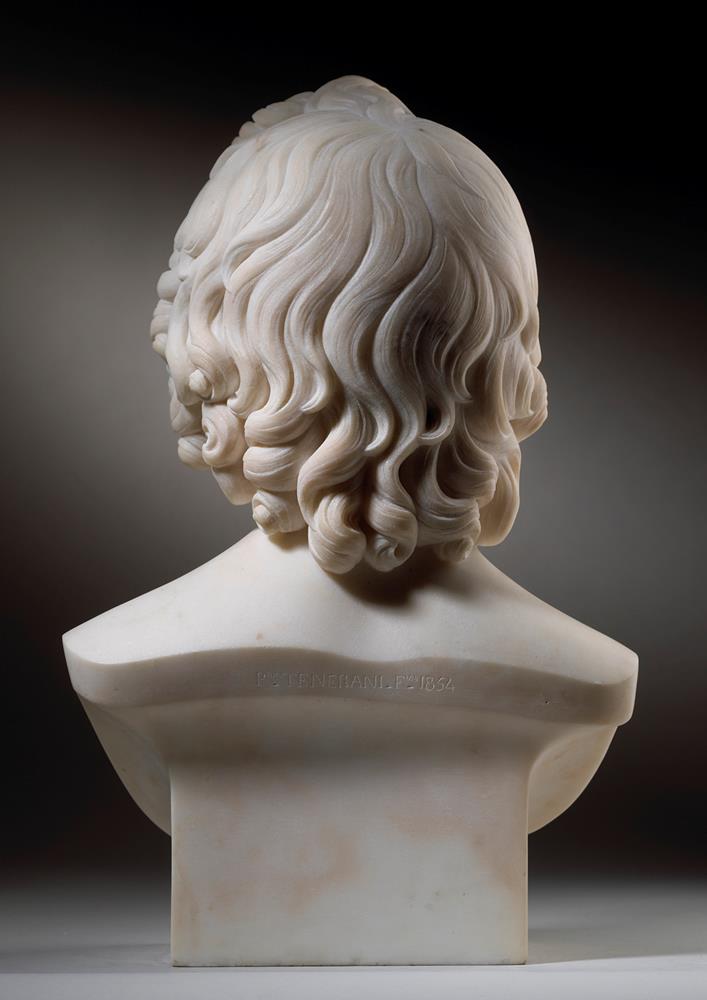 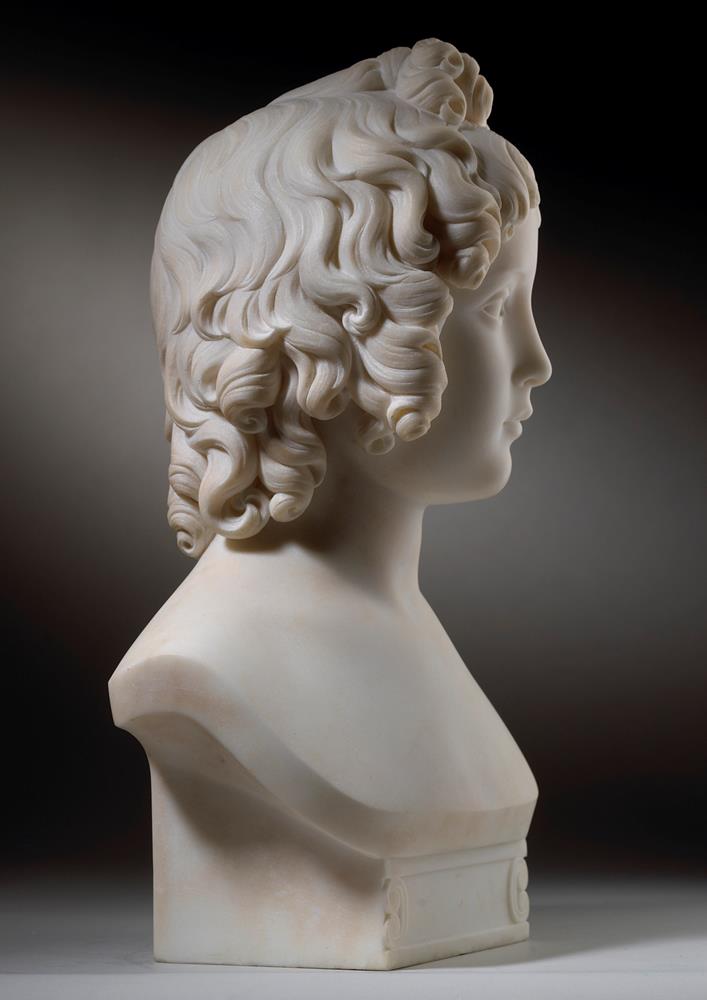 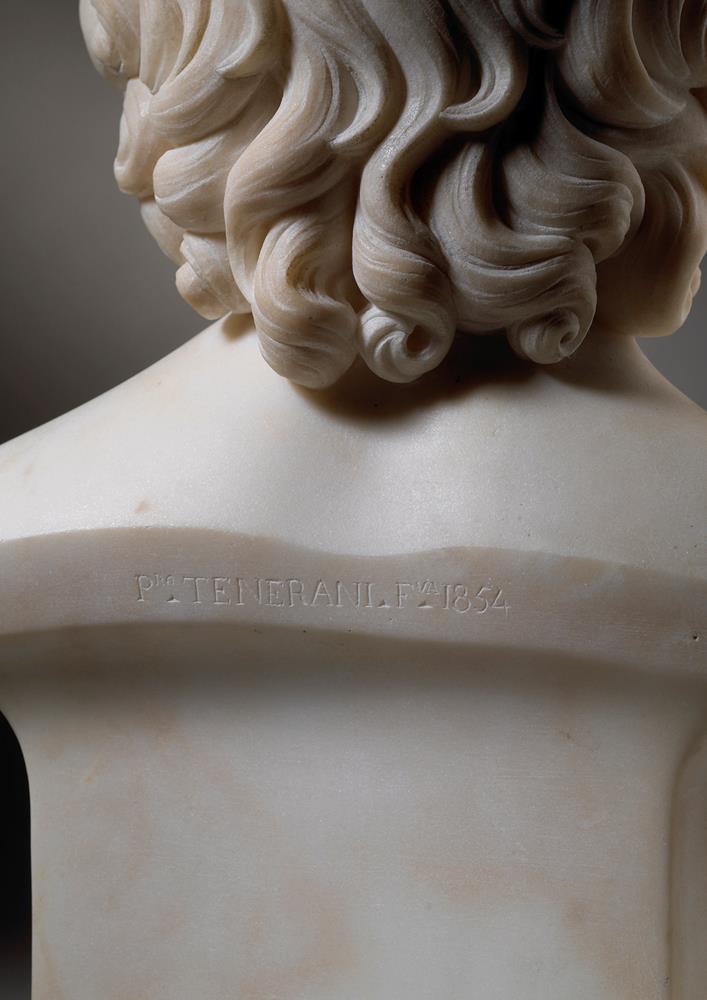 
Born near Carrara, the home of Italy’s finest statuary marble, Pietro Tenerani initially trained in the local sculpture workshop of his maternal uncle Pietro Marchetti. Upon winning a scholarship he moved to Rome, where in 1815 he entered the studio of the famed Danish master Bertel Thorvaldsen (1770-1844), under whom he perfected his modelling technique and understanding of classical sculpture. He rapidly rose to fame and by 1825 he was a member and professor at the Accademia di San Luca, of which he would be elected President in 1857. Celebrated by contemporaries for his technical expertise, his works ranged from mythological subjects to portraits - such as the present one - and monuments of figures as varied as the South American revolutionary Simon Bolívar and the Pontiff Pius VIII. Tenerani counted amongst his patrons the most prestigious collectors of the era, including William Cavendish, 6th Duke of Devonshire, Giovanni Battista Sommariva, Prince Alessandro Torlonia, Crown Prince Ludwig of Bavaria, Queen Victoria and Pope Pius IX, who named him his official sculptor. Tenerani’s rich collection of plaster casts, which offer a glimpse into the wide scope of his production, is preserved today in the Museo di Roma.

The present head has traditionally been identified as a portrait of Princess Maria Franziska von Liechtenstein. She was the daughter of Prince Alois II von Liechtenstein, the sovereign prince of Liechtenstein between 1836 and 1858, and his consort Countess Franziska de Paula Kinsky von Wchinitz und Tettau. Princess Maria was one of eleven children. Today, the Liechtenstein Collection in Vienna holds another version of this likeness (inv. no. SK643), signed and dated “P. Tenerani F. 1837”. This was documented in Vienna as early as 1841, in the conservatory of the palace of Prince Rasumofsky, a Russian diplomat and patron of Canova and other contemporary sculptors, and it is believed to have later been acquired by Prince Alois II. The Vienna portrait was therefore executed when Princess Maria was three years old, which makes her identification as the sitter likely, and also suggests that the present marble, dated 1854 – when the Princess would have been twenty years old – was commissioned from Tenerani as a keepsake of the 1837 bust, potentially for another member of the family or a close friend. Princess Maria married in Vienna on 29 October 1860 Count Ferdinand von Trauttmansdorff-Weinsberg (1825-1896), with whom she had six children.

In keeping with the neoclassical principles that he had absorbed in Thorvaldsen’s studio, in the present head Tenerani offers an idealised portrayal of childhood, in a format – the herm – directly drawn from ancient Roman prototypes. The child’s hair is modelled with a clarity of form characteristic of Tenerani, also discernible in the outlines of the eyes and the softly curled lips. This quality had already emerged in Tenerani’s early works, such as the Psyche Abandoned from 1819, and the Venus and Cupid of 1819-1825 at Chatsworth, where the curly hair and porcelain features of Cupid resemble those of the present portrait.

It is interesting to note that Tenerani used here a particular type of socle – with double volutes on the sides – that appears in other portraits by his hand, such as the herm bust of Pellegrino Rossi that is part of his funerary monument in Rome, church of San Lorenzo in Damaso (the bust 1845, monument completed 1851), the busts of Luigi Poletti and of Angelo Mai, dating to 1843 and 1845 respectively, the portrait of Michail Semenovič Voroncóv from 1846 at the Hermitage in St Petersburg and that of Tadeusz Doria Dernatovicz from 1852, in Warsaw, Muzeum Narodowe, and, significantly, Tenerani’s own Self-Portrait, known in more than one version (for example, Galleria Nazionale d’Arte Moderna, 1862).