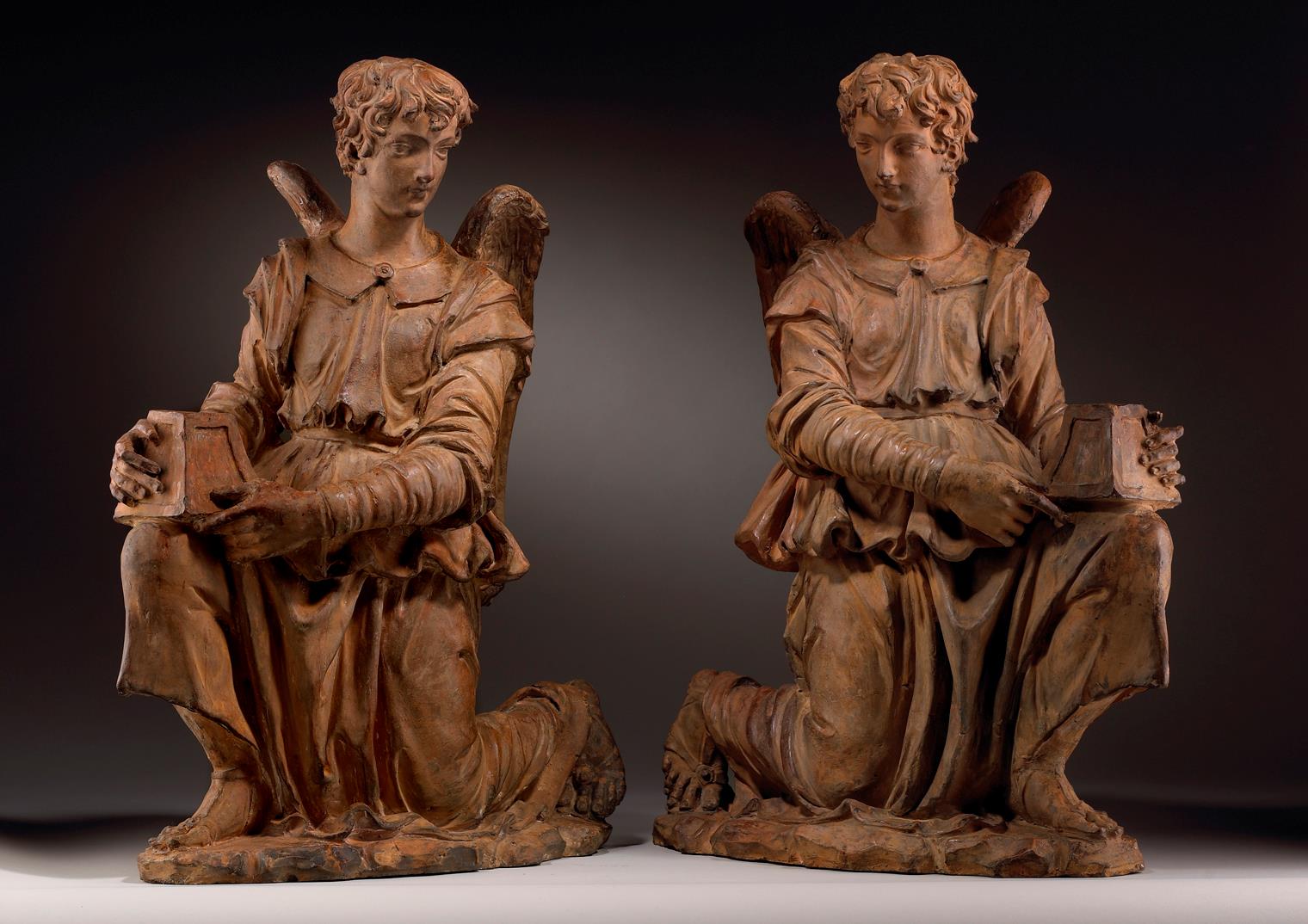 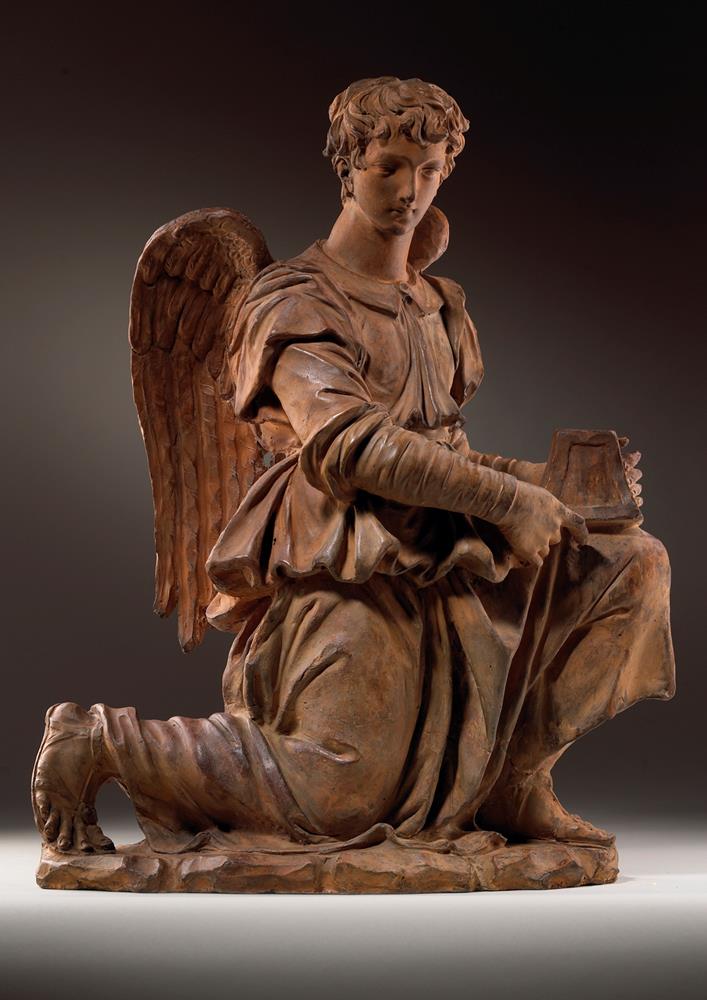 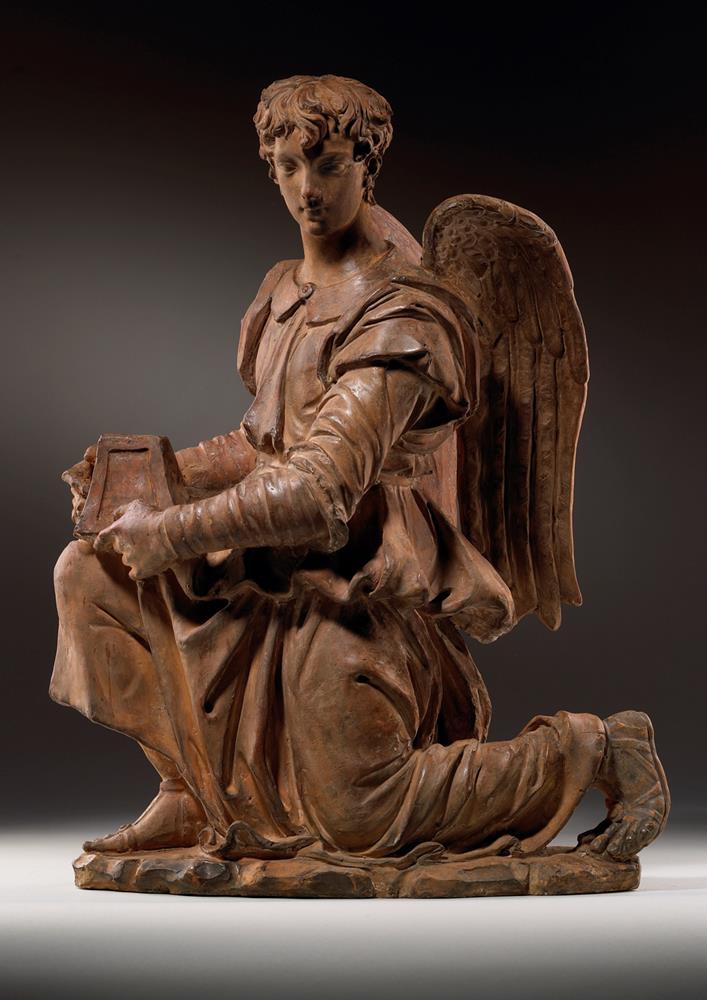 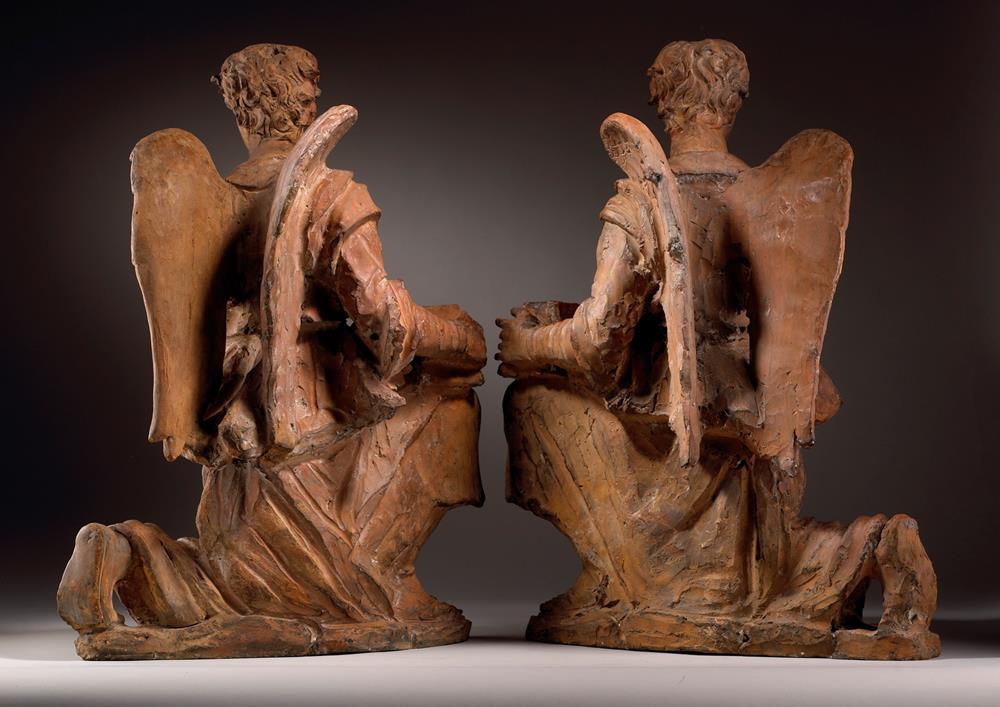 A Pair of Angels as Candle-bearers Terracotta

The present pair of terracotta angels as candle-bearers represent a beautifully preserved and important addition to the oeuvre of the exquisitely accomplished Master of the Unruly Children, a distinctive voice within Florentine Cinquecento Renaissance sculpture.

In 1890, thanks to the initiative of Wilhelm Bode, a selected number of highly reﬁned terracottas were grouped under the Notname of Meister der derben (or unartigen) Kinder. These included the Puttos Fighting in the Kaiser Friedrich Museum in Berlin and in the Victoria and Albert Museum in London, and a Madonna and Child from the same German collection. The Master of the Unruly Children’s oeuvre is constituted predominantly by works intended for private settings, characterized by a heightened attention towards emotions and their intense expression. Distinguished by a rapid and vibrant sculptural technique, the Master is skilful in giving voice to a diverse range of human states of mind, from rage to desperation, from sorrow to meditation and to laughter. Formed in the tradition of Leonardo da Vinci and Giovanfrancesco Rustici, yet also receptive to the invenzioni of Michelangelo, the Master of the Unruly Children created both religious and profane compositions, with subjects ranging from the Madonna and Child, Saint John the Baptist and Christian Charity to battles between knights and soldiers on foot inspired by Leonardo and Rustici, puttos ﬁghting, and reclining ﬁgures of Bacchus and river gods. Besides these, a number of subjects in his production are unique, including the present Angels, Fortitude, Tobias and the Angel, The Madonna and Child Standing, The Madonna and Child with Saint Anne, The Madonna Praying and a Shepherd (these two probably intended for a Nativity group).

Following on from accurate cataloguing by Philippe Sénéchal (2007, pp. 230, 233-245) the corpus of the Master has been published in a recent monograph by the present writer (Principi, 2016). Notably, careful analysis of the documentary sources has strengthened our sculptor’s identification with Sandro di Lorenzo di Smeraldo, who is recorded in Anton Francesco Doni’s I Marmi (1552-1553) as an artist specialising in the wax technique and in the realisation of funerary masks. In addition to this, a document from 1523, taking note of an estimate by Antonio Solosmeo and Niccolò Tribolo (both prominent sculptors), states that Sandro di Lorenzo was the author of a clay statuette of Bacchus, whose description closely matches the four terracotta versions of the subject attributed to the Master of the Unruly Children (Butterfield and Franklin, 1998, pp. 819-820; Principi, 2016, pp. 12-20).

Divinely youthful in appearance, the present angels kneel and gently turn their heads, crowned by short and boisterous curls, towards the beholder. They are both represented wearing billowing robes fastened around their necks with clasped collars and around their waists with girdles that create swirling folds. Each ﬁgure holds a squared candlestick support, which would have borne a wax candle directly or an iron shaft to contain it. In both sculptures the heads were ﬁred separately from the bodies. Restorations are minimal and visible in the lower parts of the wings. Halos would originally have been attached to the nape of each angel’s neck.

Underneath the right hand-side figure appears a label inscribed C.M.A. TR 1864/4. The first three initials stand for ‘Cleveland Museum of Art’, where the angels were displayed as part of an exhibition of Renaissance art, on loan from the collection of the prominent industrialist and philanthropist William Gwinn Mather (1857-1951), who served as the Museum’s president between 1933 and 1949. The exhibition’s display is described in an article that appeared in April 1922 in The Bulletin of the Cleveland Museum of Art, published to celebrate the newly opened Renaissance gallery. The angels flanked a glazed terracotta altarpiece di Benedetto Buglioni depicting The Madonna and Child with Saints Francis and Giovanni Gualberto, donated to the Museum the previous year by J.H. Wade, originally located in a chapel at Ponte agli Stolli, near Figline Valdarno, in the artist’s native Tuscany (Gentilini, 2012, pp. 20, 24).

Our angels’ originally intended function was probably as sides to an altarpiece or Eucharist tabernacle. As the freer handling of the surface on their backs suggests, they may have been intended to stand against a wall. Their ceremonial, contemplative pose directs their gaze towards the viewers, as if inviting them to participate in their liturgical adoration. This composition pays homage to Luca della Robbia’s classicizing candle-bearing angels executed between 1448 and 1451 for the tabernacle of the Holy Sacrament in the Cathedral of Santa Maria del Fiore, Florence, thus inscribing itself within a sculptural typology well established in Tuscany. In the terracotta tradition, and especially within the circle of Giovanni della Robbia, two main types of candle-bearing angels are known, with some variants, dating to the early decades of the sixteenth century. Very representative examples include the ones in the Florentine church of Sant’Ambrogio (1513) and in the Confraternity of the Misericordia (c. 1520; see Marquand, 1920, pp. 54-62, 116, 124-126, 152-155; Gentilini in Gentilini and Bietti, 1981, pp. 232-233, no. 40). With specific focus on composition, an interesting counterpart to the present figures is offered by a partly-glazed pair of angels, held in a private collection, described as a collaboration between Benedetto Buglioni and the Master of the David and St John Statuettes (Gentilini in London 2014, pp. 6-13, nos. 1-2). It is indeed in the circle of this anonymous master – identified variously with Baccio da Montelupo, Jacopo Sansovino and, more recently, Benedetto da Rovezzano – that elements key to the stylistic contextualisation of the present pair of terracottas can be found (see Principi 2016, p. 30 and note 63, with previous bibliography).

Hitherto little known, two terracotta candle-bearing angels preserved in the private rooms of the Oratory of the Buonomini di San Martino order in Florence offer the closest case in point, their dimensions analogous and their poses and robes bearing strong resemblances to the present ﬁgures (left: 59 × 33 × 14 cm; right: 62 × 35 × 17 cm). A pair identical to these has been recently offered in a sale, with an attribution to Benedetto Buglioni (Sotheby’s, London, 10 December 2015, lot 364). Formerly ascribed to Verrocchio or his studio (Bargellini 1972, pl. 6), the Buonomini di San Martino angels can be attributed with certainty to the workshop of the Master of the David and Saint John Statuettes, and are crucial to understanding the cultural roots of the present terracottas. This becomes evident upon observation of the stylistic characteristics of these, which, however, by virtue of their greater dynamism in the outline of the robes and hair, point in the direction of the Master of the Unruly Children. Like the Master of the David and Saint John Statuettes, this gifted sculptor and his workshop specialized in small-scale terracotta ﬁgures and originated in the artistic milieu of Verrocchio.

The importance of the discovery of the present Angels rests ﬁrst and foremost in their uniqueness within the Master’s oeuvre. Additionally, our pair provides signiﬁcant new conﬁrmation of the artist’s involvement with religious patrons. Excluding the Madonna and Child and Charity groups destined for private devotion and collections, the sole evidence of commissions carried out by the Master of the Unruly Children for the purposes of public worship was, until now, represented by three Marian groups preserved in the region around Pistoia.

Comparison with the Charity in the Victoria and Albert Museum, London, one of the most representative works by the Master of the Unruly Chidren (Principi, 2016, p. 78), is essential to the attribution of the present Angels. In each ﬁgure, the drapery is modelled with the same rapid and impressionistic treatment. The angular rhythm of the folds around the waists and the planar method of deﬁning the pleats in sleeves are also analogous, as is the sinuous way in which the robes fall to the ground. The vibrant and multifaceted handling of our Angels’ spiralling curls is reﬂected by the swirling locks of the unruly child sitting on Charity’s lap, modelled with comparably incisive vigour. A similar headdress appears in the Battle between Knights and Soldiers from the Rucellai collection, today in the Palazzo Vecchio in Florence, where the ﬁgure that serves as the composition’s apex displays a vivacious and tangled mane. Further conﬁrmation of the Master’s authorship of the present Angels can be found in comparing the feet of our ﬁgures, elegantly clad in all’antica sandals, and those in the Charity group, all modelled in a pointed way, with distinctive phalanges. Similarly, the grounds that our candle-bearers, the Charity and the Rucellai Battle stand on all display the same type of jagged terrain and rocky formations.

I would like to thank Professor Giancarlo Gentilini for his suggestions and for agreeing with the attribution to the Master of the Unruly Children.

By descent into the Ireland family, Shaker Heights, Ohio, until 2016