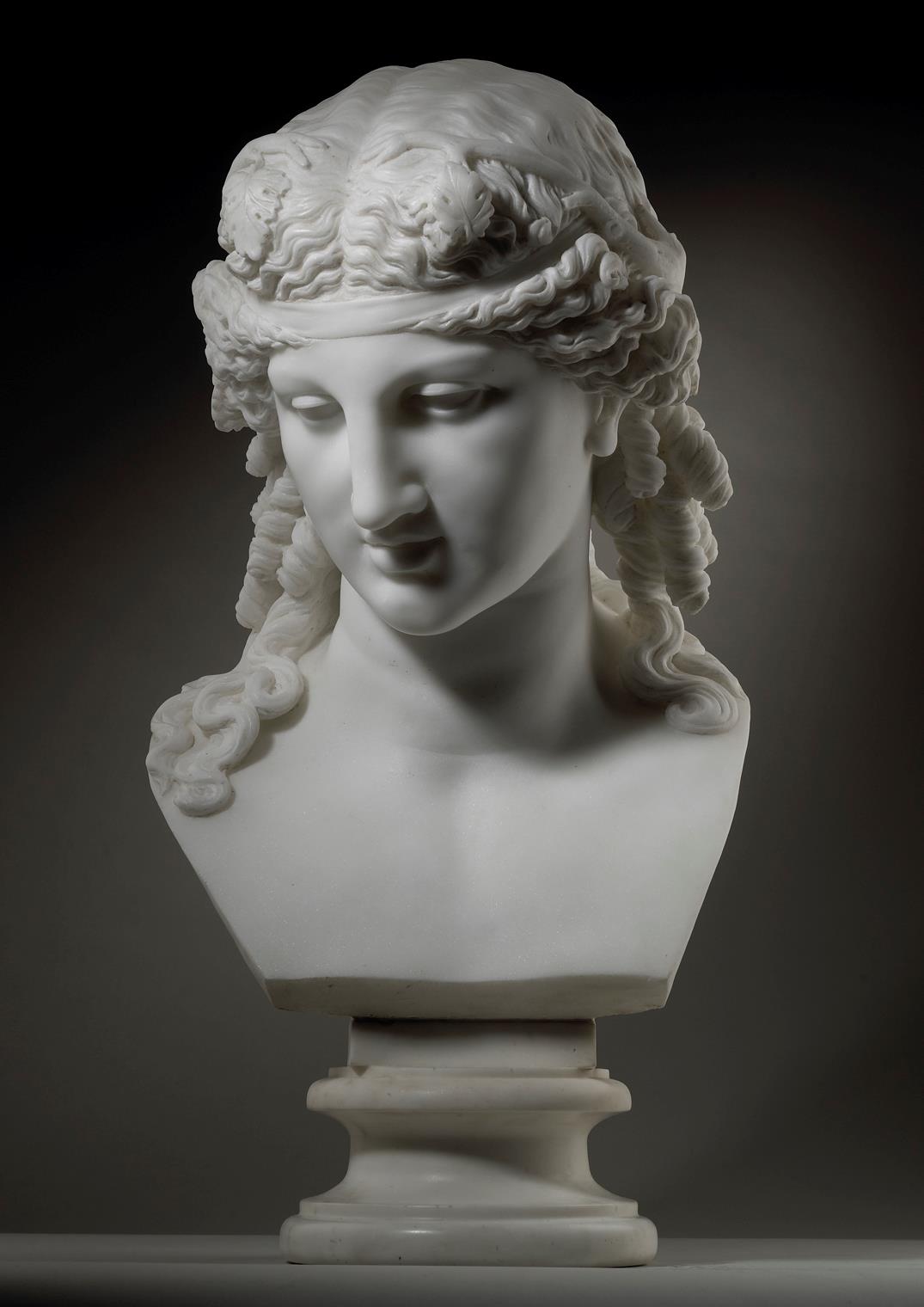 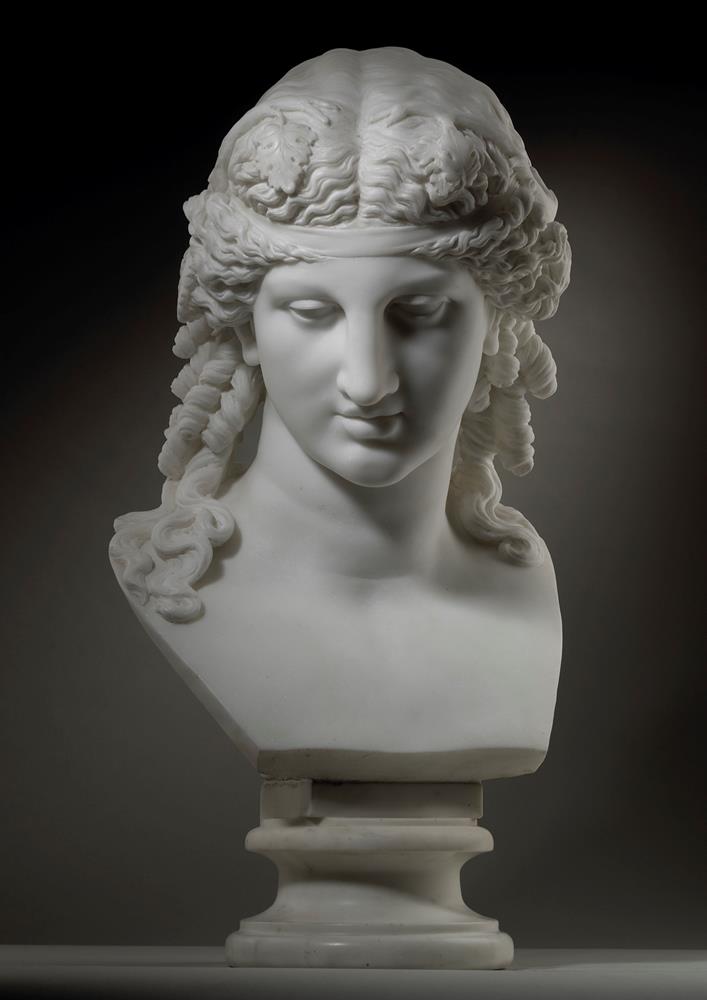 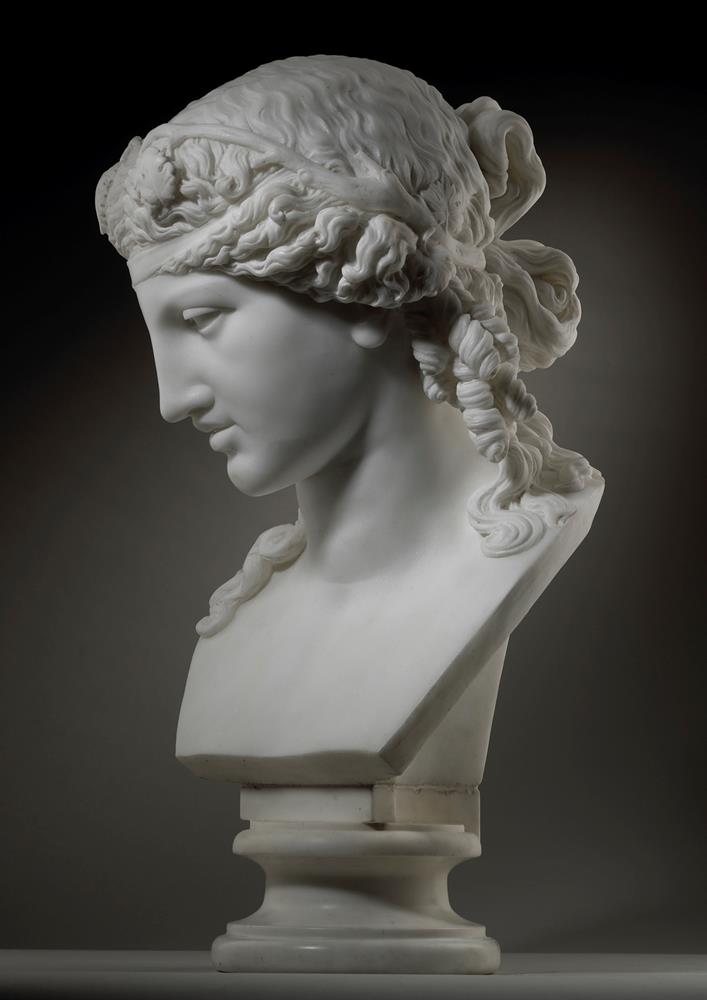 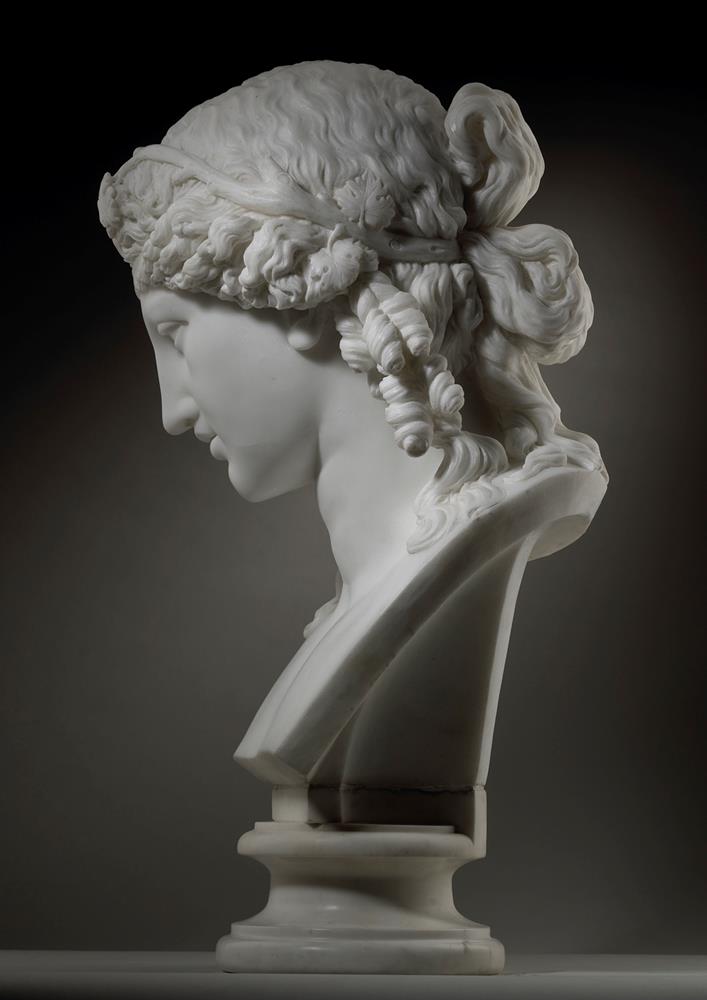 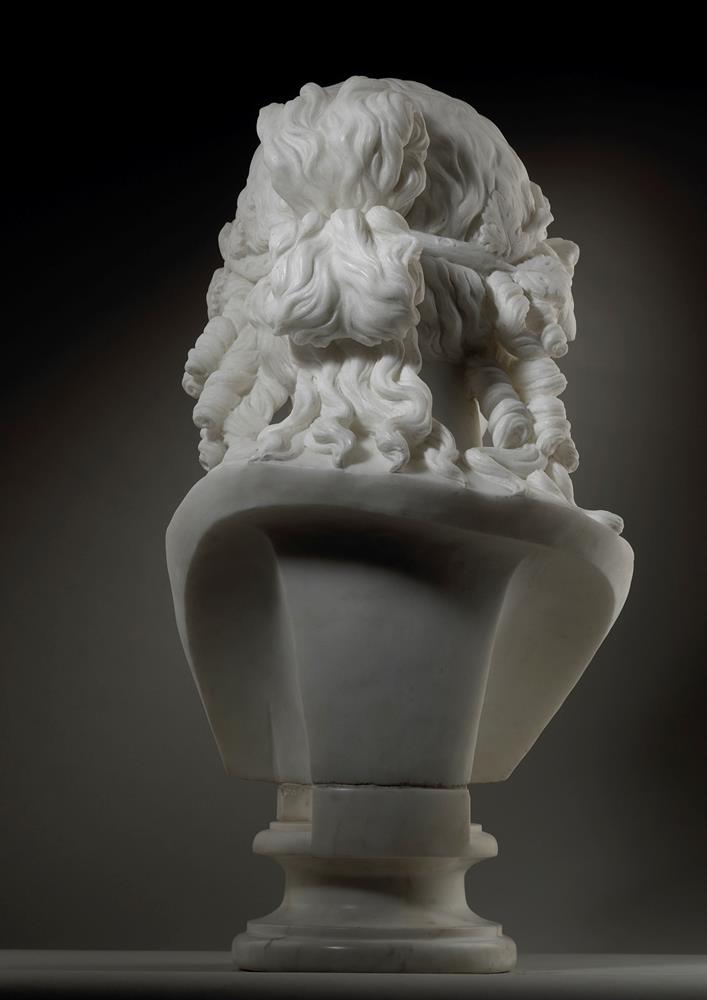 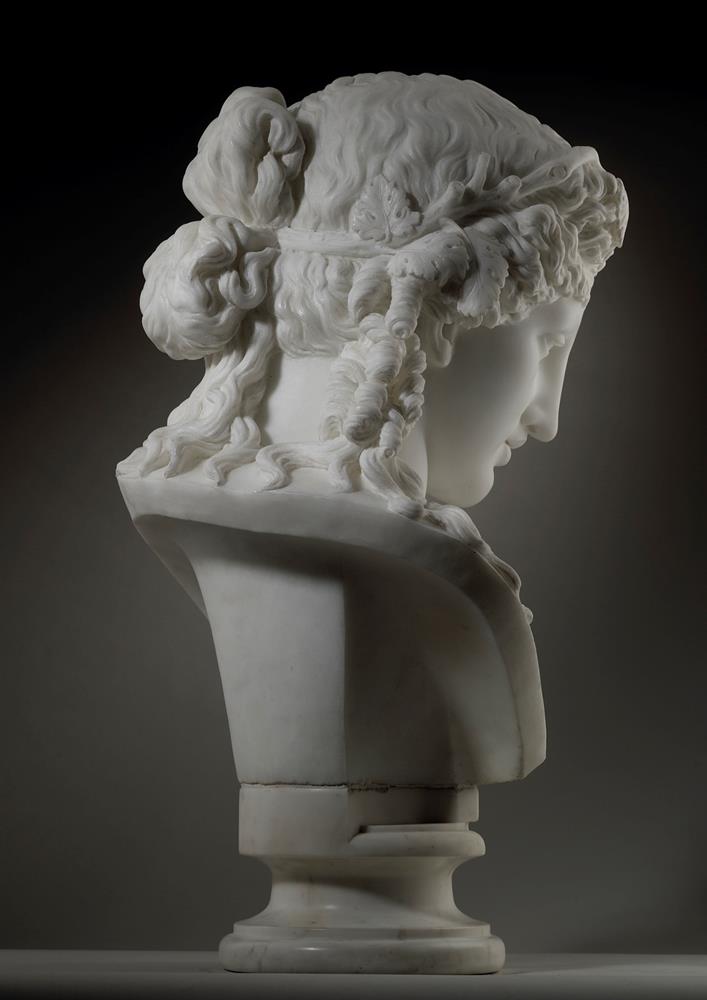 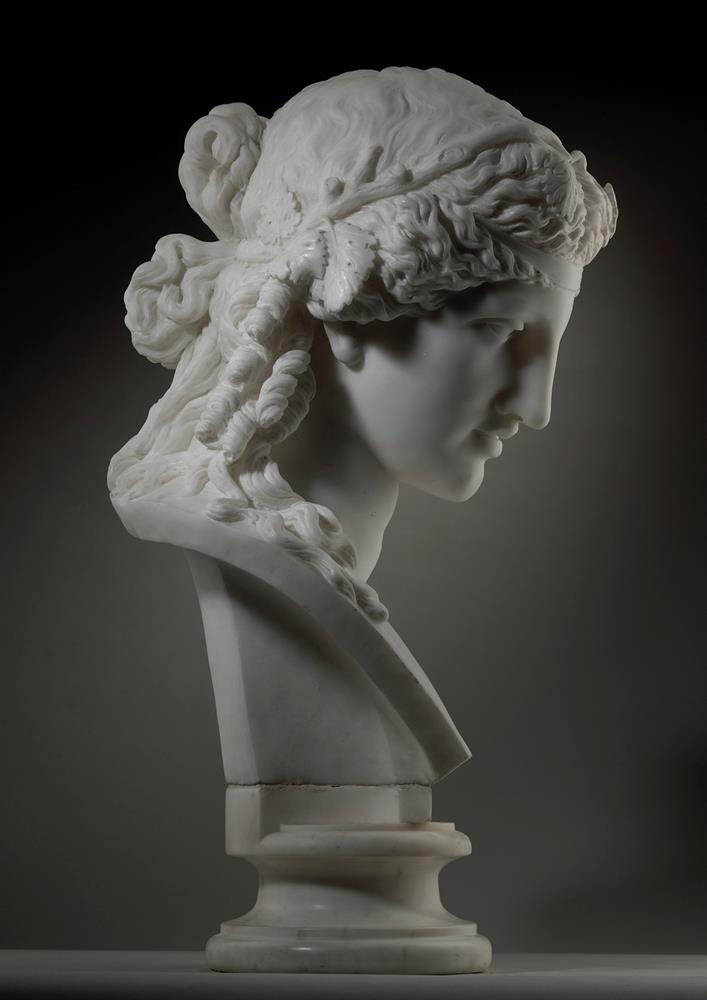 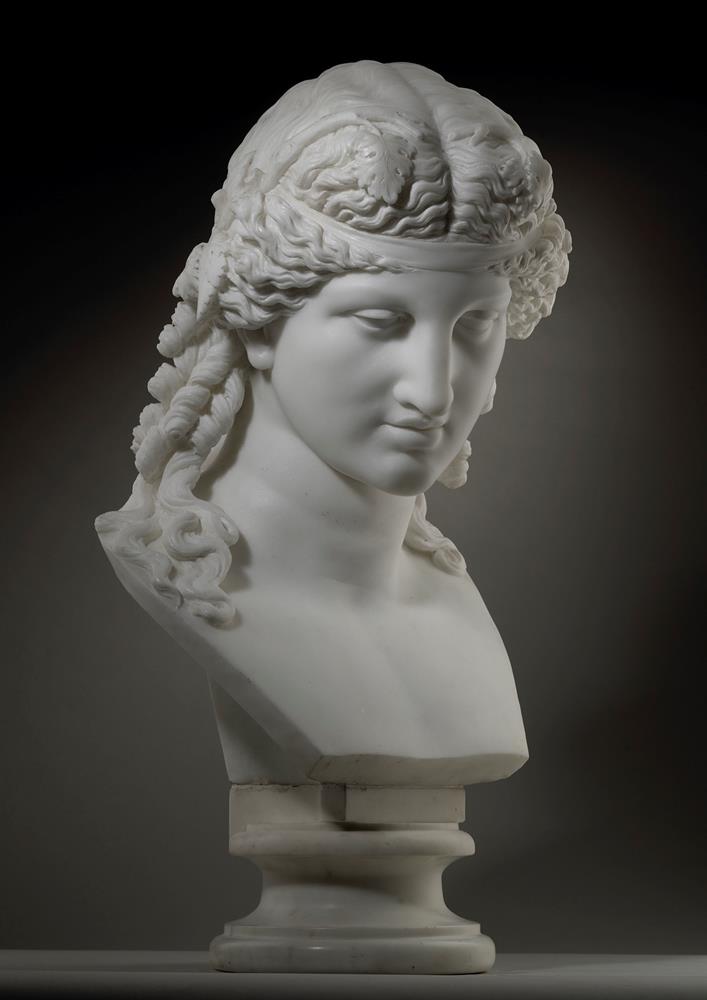 Bust of Dionysus, after the Antique Second half of the 18th century

A pupil of Bartolomeo Cavaceppi (c. 1717 – 1799), Carlo Albacini was not only a highly successful and noted copyist of antiquities, but also a sought-after restorer, best known for his restorations of the marbles in the prestigious Farnese collection. Recognised as one of the foremost sculptors patronised by the wealthy, distinguished Grand Tourists visiting the Eternal City in the late eighteenth century, Albacini was highly celebrated during his lifetime. Praises and superlatives abounded over his unrivalled talent as both a sculptor and restorer; indeed, it is known that numerous of the finest Greco-Roman sculptures that found their way into English collections passed through his hands. Albacini’s international, elite clientele included many important figures such as the Bourbon King Ferdinand of Naples and Thomas Jenkins, the powerful English banker and leading art dealer in Rome in the early 1770s.

Exquisitely carved, the present work is based on the Roman marble bust of Dionysus, realised during the late Hadrianic period (A.D. 117 – 138) and now conserved in the Capitoline Museums, Rome (inv. 734). A Roman replica after a fourth-century BC original, the statue was part of a group of sculptures donated by Pope Pius V (1566 – 1572) to the Palazzo dei Conservatori in 1566. In 1797, it was handed over to the French under the terms of the Treaty of Tolentino; however, following the defeat of Napoleon, it was returned to Rome in 1816 and re-installed in the Capitoline Museums. The bust shows Dionysus as a young man, with his head slightly bent forward and tilted to the right, fixed in a calm, solemn gaze. The delicate beardless face is characterised by softly modelled cheeks, a firm chin, straight nose, and full lips. Particularly striking is the luxuriant hair, carved with a remarkable level of definition and naturalism. The head is crowned with a wreath of ivy leaves, while his locks are softly tied back with a ribbon that runs across his forehead, framing his most handsome and youthful countenance.

Balancing classical idealization with carefully observed naturalism, the present head of Dionysus – the ancient god of wine and revelry, known as Bacchus to ancient Romans – recalls his youthful appearance in the Homeric Hymn VII:

‘I will tell of Dionysus, the son of glorious Semele, how he appeared on a jutting headland by the short of the fruitless sea, seeming like a stripling in the first flush of manhood: his rich, dark hair was waving about him […]’ (Hymn to Dionysus, p. 429)

We encounter the same youthful appearance in Seneca’s lyrical description:

‘Let the people’s hymn sound with the praise of Bacchus. Bind your streaming locks with the nodding ivy, and in your soft hands grasp the Nysaean thyrsus! Bright glory of the sky, come hither to the prayers which thine own illustrious Thebes, O Bacchus, offers to thee with suppliant hands. Hither turn with favour thy virginal face; with thy star-bright countenance drive away the clouds, the grim threats of Erebus, and greedy fate. Thee it becomes to circle thy locks with flowers of the springtime, thee to cover thy head with Tyrian turban, or thy smooth brow to wreathe with the ivy’s clustering berries; now to fling loose thy lawless-streaming locks, again to bind them in a know close-drawn […]’ (Seneca, Oedipus 401 ff)

Over the centuries, the ‘virginal face’ and ‘star-bright countenance’ have puzzled scholars, who formerly identified the bust as that of a Bacchante, the sea goddess Leucothea, or Ariadne. The bust certainly fascinated the German art historian J. J. Winckelmann (1717-1768), who mentioned it in his writings on various occasions, and even included an engraving of it in his Monumenti antichi inediti, where he identified it as Leucothea. In his monumental History of Ancient Art (Geschichte der Kunst des Alterthums), Winckelmann finds in the bust a ‘joy [that] floats, like a soft breeze that scarcely stirs the leaves’, which he juxtaposes with the representation of suffering in the Laocoön, as modes of expression ‘in the beautiful style’ that did not detract from ‘harmony and grandeur’ (Winckelmann 1881, p. 138).